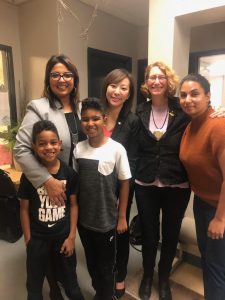 Pictured here are CUPE Local 1936 President, Sheryl Burns, the CUPE BC Regional Director, Meena Brisard and her children, the Honourable Minister of State for Childcare, Katrina Chen, and Administrative Assistant to the Honourable Katrina Chen, Niki Sharma who joined CUPE Local 1936 Early Childhood Educators from Collingwood Neighborhood House to discuss British Columbia’s Child Care Plan of BC on Wednesday, October 10th.  The Assistant Deputy Minister of the Early Years and Inclusion Division, Ministry of Children and Family Development, Christine Massey was also present.  CUPE Local 1936 members were provided an opportunity to ask Minister Chen questions relating to the Childcare Plan of BC and expressed gratitude for the NDP Provincial Government’s commitment to Early Childhood Care and to those who provide childcare to the province’s children.

CUPE Local 1936 would like to thank Collingwood Neighborhood House Early Childhood Educator, Kulwant Kular who graciously prepared the room used by her program for this meeting.