Skip to content
HI, if you are interested in attending any of these webinars, please let me know so I can register you. bway1936@gmail.com
They are intended for members that are on the OH&S committees.

Health & Safety Webinar: In the days of the Pandemic, what should a Health & Safety Committee focus on?   Mar 18, 2021     ONLINE, Burnaby, British Columbia 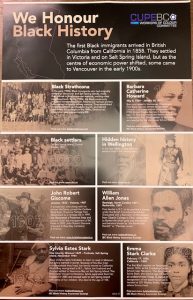 Please email bway1936@gmail.com if you would like to have the above poster mailed out to you so you can display in your worksites on the union bulletin board. The poster recognizes the important contribution of Black Canadians, the diversity of the Black community, and its importance to its history.

Workers at Pacific Blue Cross are known for the caring and dedication they bring to the job every day. As underwriters, benefit examiners, disability claim representatives, benefits administrators and call centre employees, they do everything they can to help provide the best benefit coverage possible for those insured under PBC. Now they’re being forced to defend their own benefits.

Together we can put pressure on this employer to give its workers a fair deal. 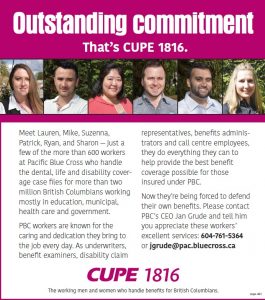 Register in advance for this meeting:
https://us02web.zoom.us/meeting/register/tZYtcO-tqDsoH9VkXQtHNEJcr6TS8o3y_E9H

After registering, you will receive a confirmation email containing information about joining the meeting.

The Risk and Resilience in the Health and Care Workforce project, based out of Simon Fraser University, is conducting research on how women working in health and social service roles have been particularly affected by the pandemic. For more information about the project see: https://www.sfu.ca/fhs/gendercovid/risk—resilience-.html

In order to learn more specifically from the experiences of women working on the front lines in community social services, we are hosting virtual focus groups on Tuesday 23 February at 7 pm and Thursday 25 February from 7-8pm PST.  Focus groups will last approximately an hour and be structured around a few key questions, as well as open discussion. If you identify as a woman and are working in community social services, we want to hear from you!

To register for a focus group, or for more information, please email Dr. Julia Smith at jhs6@sfu.ca, indicating which date you are available.

If anyone is interested in taking Level 1 Shop steward training please let    bway1936@gmail.com know, asap.  (these classes fill up quickly)

So You Want to Talk About Race (2019) by Ijeoma Oluo              Guides readers of all races through subjects ranging from intersectionality and affirmative action to “model minorities” in an attempt to make the seemingly impossible possible: honest conversations about race and racism, and how they infect almost every aspect of American life.

How to be an Anti-Racist (2019) by Ibram X Kendi         Takes readers through a widening circle of antiracist ideas—from the most basic concepts to visionary possibilities—that will help readers see all forms of racism clearly, understand their poisonous consequences, and work to oppose them in our systems and in ourselves.

Seven Fallen Feathers: Racism, Death, and Hard Truths In a Northern City (2017) by Tanya Talaga      Using a sweeping narrative focusing on the lives of seven Indigenous students who died in Thunder Bay, Ontario, delves into the history of a northern city that has come to manifest Canada’s long struggle with human rights violations against Indigenous communities. Award winning work about systemic racism, education, the failure of the policing and justice systems, and Indigenous rights.

The Skin We’re In: A Year of Black Resistance and Power (2020) by Desmond Cole        Puncturing once and for all the bubble of Canadian smugness and naïve assumptions of a post-racial nation, Cole chronicles just one year—2017—in the struggle against racism in this country. In a month-by-month chronicle, Cole locates the deep cultural, historical and political roots of each event so that what emerges is a personal, painful and comprehensive picture of entrenched, systemic inequality.

https://www.nfb.ca/film/jordan-river-anderson-the-messenger/   The story of Jordan River Anderson – after whom Jordan’s Principle is named – and how his life initiated a battle for the right of Indigenous children to receive the same standard of social, health and educational services as the rest of the Canadian population.

Nîpawistamâsowin: We Will Stand Up (Dir. Tasha Hubbard, 2019)

https://www.nfb.ca/film/nipawistamasowin-we-will-stand-up/                Follows the journey of Colten Boushie’s family as they search for justice, taking their fight to the highest echelons of power and, ultimately, to the United Nations. Hubbard deftly illustrates how the long history of violence against Indigenous people continues to define life in parts of Canada, and the impact of systems that have been the instruments of colonial domination for centuries.

The Skin We’re In (Dir. Charles Officer, 2017)   https://www.reelcanada.ca/films/the-skin-were-in/      An urgent exploration of race relations, this documentary follows award-winning journalist and activist Desmond Cole as he pulls back the curtain on anti-Black racism in Canada, inviting all Canadians to understand the experience of being in his skin.

When They See Us (Dir. Ava DuVernay, 2019)      https://www.netflix.com/ca/title/80200549    Five teens from Harlem become trapped in a nightmare when they’re falsely accused of a brutal attack in Central Park. Based on the true story.

Anti-Racism I (University of Colorado Boulder)     https://www.coursera.org/learn/antiracism-1       An introduction to the topic of race and racism in the United States, the course defines Whiteness and other relevant terms; identifies the impacts of race, racism, and anti-racism; and applies the terms and concepts in relation to overlapping oppressions and possibilities for anti-racism work.

The Resilience BC Anti-Racism Network delivers coordinated services using a “Hub and Spoke” model to connect BC communities with info, support, and training to address and prevent future incidents of racism and hate.  Please find attached a resource document from the Nanaimo-Ladysmith Spoke Services containing a list of readings, films, and course offerings.  For more information on community-based “Spoke Service” branches in your area, please also visit the Resilience BC Anti-Racism Network website (click here)

The BC Ministry of Advanced Education, Skills and Training has fully funded an online fall-prevention course, Skills to Support Independent Living, designed specifically for home-care aides. Offered through the University of Victoria, this micro-credential is available to these workers in BC at no charge between January and March 2021.  More information about the course and how to register can be found on the UVIC Continuing Studies program website (click here).

The CSSBA and CSSEA have announced the Low Wage Redress amounts that will come in to effect on April 1, 2021.  You can view the bulletin by clicking here.

Note that these final amounts include the 2% General Wage Increase as well as the Low Wage Redress amount.  It also brings all of our target wages within 1% of the comparitors in the Health Sector.  For many of our members, it represents a total increase of over 15% from March 31, 2018 to April 21, 2021.