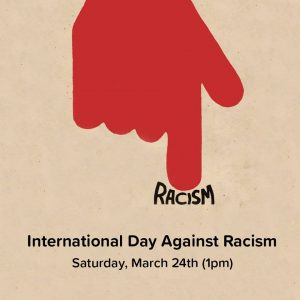 We will march through the Downtown Eastside and Chinatown and back to Thornton Park. This is where Indigenous, Black, Chinese, Japanese and South Asian people lived historically.

The International Day Against Racism and Bigotry is observed annually to remember the 69-people killed by police at a peaceful demonstration in Sharpeville, South Africa against the apartheid “pass laws”. Proclaiming the Day in 1966, the General Assembly of the United Nations called on the international community to redouble its efforts to eliminate all forms of racial discrimination.

1. To help us create a scent-reduced event space, please refrain from wearing perfumes or any scents the day before the rally, as well as during it. Please also reduce scent from tobacco or incense.
2. ASL interpretation is in the process of being booked. If you require ASL interpretation, please let us know by people to confirm ASL interpretation March 19th at 1:00pm by emailing us at accessibility.justice.now@gmail.com
3. Gender neutral and wheelchair accessible washroom locations along the march route are to be confirmed.
4. Also to reduce cell phone frequency, please turn of your cell phones at the march and rally if possible as people do have sensitivity to cell phone frequencies.